The wishlist is a great tool to shape your pulls in AFK Arena so I think it’s super important that I write a guide to give you all information you need to know about the wishlist to get the best out of it.

In the first part I want to give you some important information about the wishlist before I give you my personal recommendation what heroes you should place there and in waht order you should have them in there.

So, you can find the wishlist in the tavern on the top left where you will see 5 heroes for every faction that you can place there. 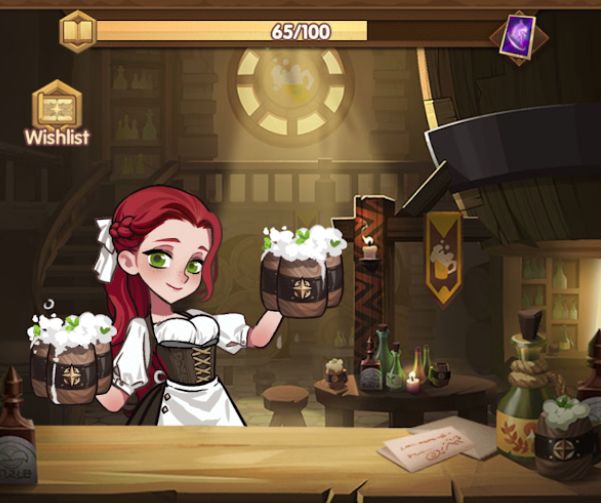 There are some important things you need to know

Having a hero on the wishlist won’t guarantee you that you get it, it will roughly give you an eight times higher change to get that hero.

So, chances to get a specific hero are depending how many heroes you see in the AFK Arena, and they add about 1 new hero every month).

Let’s do the math real quick… chances to pull a elite hero is 4.61% in total when you do a single pull. This means chances to get a specific hero is 0.07% normally for a single pull, basically nothing.

So, the wishlist will work well and will prioritize heroes that you need without neglecting other heroes.

Also, having heroes on the wishlist will not lower the chances to pull Celestials or Hypogeans!

Full Wishlist VS One Hero Wishlist

I know there are rumors around that placing only a single hero on the wishlist will give all the extra chances to that single hero. That’s nonsense. If you place one hero there only that hero will give you that 5.6% chance for the 10x pulls, if you place all heroes there, all of them will get the 5.6% chance. Still, about 20% of the elite heroes you will will not be heroes you have on your wishlist.

Now, here’s the normal priority you should use. Once you have enough elite copies (8 copies) to ascend a hero, take it off your wishlist and replace it with the next hero in the list above in your wishlist.

This is the setup you should start your wishlist with. Only swap out heroes that you have ascended:

Lightbearer: Rowan is top notch, all the way in AFK Arena and getting him to ascended is a win long-term. Lucius is a nice tank that will carry you mid to late game. Rosaline works also great later giving two ults to your carry hero. Gwyneth and Belinda are great damage heroes that you can also use well in late game.

Maulers: Brutus is a killer early to mid/late game before you will replace him. Safiya will be your carry in the end game campaign and Warek, Skriath are great Maulers as well.

Wilders: really nice setup here with Eironn and Lyca for the later game, Saurus a perfect hero for boss fights and Tasi nemora will also be very useful.

Graveborn: these 5 heroes will take you also far. I left out Shemira as you can get her from the lab store so Daimon is a great choice here as well

If you have one of the above heroes ascended, here are the heroes you can swap in later:

Lightbearers: Fawkes should be the first swap in if you get an open pot as he’s great for crowd control and useable even at lower ascension when you need to take one enemy hero out of the equation. Cecilia would be next as she is a great mage killer. Not as effective as Athalia but really effective against teams with many magical backline heroes.

Maulers: here you have plenty options and I’d go with Skreg and Warek first as they are nice tanks and can also Warek is also nice heroes against bosses.

Wilder: Would swap in Solise first as she is a solid damage dealer and useful in the faction tower later in the game and overall helpful here and there if you need a larger roaster. Then Gorvo is also a good choice as he can be tanky when leveled up and ascended.

Graveborn: Izold is a good option later in the game where he absolutely gets beast, other than that look who you can get ascended next.