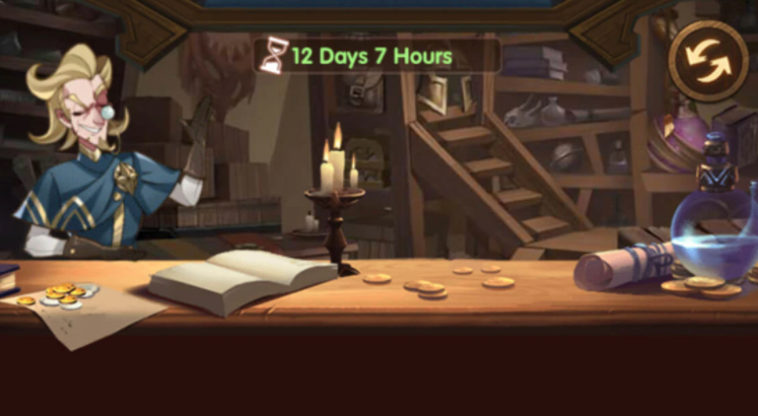 In the daily shop, which refreshes every 24 hours, you have 3 things that you need to buy every single day, without any exception:

Hero’s Essence (500) – this is a must-pick long-term and there should not be a single doubt about it. Dust is super limiting at several points in the game.

You’ll need about 120,000 Dust per hero to take a hero to Level 240 and you need to do that 5 times to get them ready for the Resonating Crystal. That’s 600,000 Dust in total and you will have to wait a long time mid-game when you don’t pick this up every day until your heroes are Level 240. And after that, you still require a lot to level them up past Level 240 for every single step. Just to put this into perspective, you can earn about 50-100 per AFK hour so you will need need to play about 250 days only to reach Level 240 with your heroes so you will boost that about 20% buying the 500 daily dust.

Poe Coins (200) – getting furniture is a super long process. Equipping only one hero with 9 mythic furniture items takes about 7,500 Poe Coins per items. That’s almost 70,000 coins for one hero assuming you won’t pull any duplicate you can’t equip (which is always happening), so think more about 100,000+ coins per hero to equip furniture. This 200 won’t do much but when you look at the fact that you will get about 600-800 per day from AFK rewards, that’s still a 25% boost. No-brainer daily pick.

*Optional* Emblems – emblems can be an issue later when you have several heroes where Signature Item +10 or +20 (check my tier list here) makes sense. I’d recommend to always stock them up so you have 300 of the purple and the yellow ones in stock.

The guild store is not that important earlier in the game but will become the place where you get the gear once you unlocked mythic gear here.

If you see a faction mythic gear that fits a hero that you use frequently (check out the tier list for more info), take it. This is normally the first priority.

If you see a stone for a faction mythic gear you already equipped, it’s also worth taking.

Whenever you pull any green hero, you will get Hero Coins.

I recommend you to always stockpile them up until you have the 18,000 for 60x Epic Soulstones, which is basically an epic hero copy you get.

This is the better value than turning them into a fodder hero that you will get plenty anyways.

I know it’s tempting to get a fodder you’re lacking but the value is s much worse that it doesn’t make much sense as you will get fodders basically every day.

For every lab run you do you will get Labyrinth Token that you should invest in this order:

Prio #1 – Shemira – get Shemira copies until you can ascend her. She will be able to carry you up to Chapter 26/27 in the campaign and is super useful in Labyrinth, Peaks of Time, Voyage of Wonders and some other events. Getting her ascended is long-term the best investment you’ll do unless you already have her ascended. No need to take her to 5-Star, ascended is enough

Prio #2 – Arthur – a super meta hero that is really strong also later in the game and you only need to build him (you need 60 pieces and get 15 pieces with every purchase in the Lab Store), and you can have him ascended right away by linking him to any ascended hero.

Prio #3 – Wu Kong – the next hero to get to ascended using your lab tokens. Also super strong ans useful in early, mid and late game as well.

Prio #3 – Faction Emblems – faction emblems will become a huge bottleneck at some point so make sure to get at least your first heroes to SI+30 (see here which ones) before spending tokens further on heros in the lab store.

Prio #4 – Thoran – Thoran cheese is a mighty strategy and you also find good use for him in the Graveborn Tower later as well. Pick up the epic copies you need to get him ascended. By the time you build the heroes mentioned above you probably only need a few copies by now.

Prio #5 – Estrilda – Estrilda will get strong later in the game and find good use. Same as with Thoran, pick up the copies you need to ascend her.

Prio #6 – Nemora – super support and useful for some battles and in the Wilder Tower as well. Pick up the copies you need.

Prio #7 – Skreg – great tank and useful as tank in the Wilder Tower as well. Also pick up the copies you need at this point

Similar to the Labyrinth Store you will get token here that you can save up to get hero copies. Here’s my recommended priority:

Prio #1 – Ezizh – extremly strong hero and you should use all tokens first to get him ascended, even if that will take months through the Challenger Store. The advantage is that you don’t need to use Stargazing on him and can focus there on Talene and Twins.

Prio #2 – Athalia – next hero to ascend via the Challenger Store, although she is more PvP heavy so think about if you really want to build her.

Prio #3 – Flora – also a useful hero that you should build via the Challenger Store. if you’re not into PvP at all you might skip Athalia and do Flora first.

Prio #4 – Faction Emblems – don’t spend more Challenger Token on heroes if you built the heroes above and now spend everything for Faction Tokens to level your signature items. The other heroes will come from normal pulls so no worries here!